This Side of Death 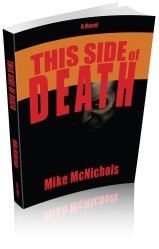 Two years after the violent death of their father, Jay and Vickie Ellington discover that they are being stalked by a dark, terrifying presence. After two close acquaintances are murdered, they meet a mysterious young man and a priest who connect present events with a deadly encounter in a pacific coast bunker in the early days of World War II. Jay and Vickie learn that they carry within themselves a legacy that threatens their stalker. They fear that the people who have now entered their lives may be complicit in the terror that surrounds them. The nature of the local murders and the stories that come to light suggest that something vampiric has been pursuing the Ellingtons for three generations. Jay and Vickie are now faced with fulfilling their destiny by coming to grips with the evil that hunts them.


An Excerpt from Chapter 1
In 1989 the Berlin Wall came down in Germany, the serial killer Ted Bundy was electrocuted in Florida, the Menendez brothers murdered their parents in California, and Pete Rose was banned from baseball in Cincinnati. Dead Poets Society won an Oscar in Hollywood.

In that year Harbor Beach, California carried on as one of the last quiet Pacific coast towns. The surf was never as spectacular as it was for the big name beaches farther south, but that kept the tourist trade at a moderate level. Harbor Beach remained a sleepy town, even though it had its own mall on the far edge of the city limits.

The hills surrounding Harbor Beach helped it to exist in a certain amount of isolation from the expanse of Los Angeles. The roads in and out of the village passed between the hills into the valley where Harbor Beach had emerged over a hundred years ago. The coastal highway ran along a series of hills that fringed the beach, forcing a visitor to find the occasional passages that provided entrance to the quiet beach areas.

Mike McNichols writes, teaches, and works in Southern California. He is the author of The Bartender: A Fable of a Journey, Shadow Meal: Reflections of Eucharist, and The Dead Cry Out: A Novel.